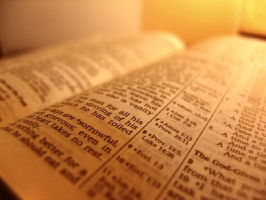 For the promise, that he should be the heir of the world, was not to Abraham, or to his seed, through the law, but through the righteousness of faith. ...
And being fully persuaded that, what he had promised, he was able also to perform. And therefore it was imputed to him for righteousness. Now it was not written for his sake alone, that it was imputed to him; But for us also, to whom it shall be imputed, if we believe on him that raised up Jesus our Lord from the dead;

For if, when we were enemies, we were reconciled to God by the death of his Son, much more, being reconciled, we shall be saved by his life.

But without faith it is impossible to please him: for he that cometh to God must believe that he is, and that he is a rewarder of them that diligently seek him.